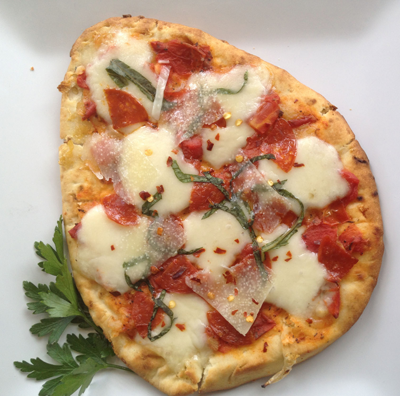 For those of you that have a toaster oven, here is a quickie lunch. Pizza! This really hits home with me. I love pizza. If I didn’t love to cook, I would eat pizza every day. Hmm let’s see… Pepperoni, Mushroom and Green Pepper pizza… All the food groups. Works for me. 😉

I put a Naan bread into the toaster oven and set it on Toast. ‘Toast’ it for 2-3 minutes. This will thaw it enough to put your toppings on. You don’t need to wet the Naan bread, it will be moist from the freezer. For the sauce, I cheat. 😉 I use store bought pizza sauce. (this was a quickie lunch remember). Pour the sauce on the bread. Spread with a spoon. Now comes the controversy. Toppings over or under the cheese. Before you drag out the arm wrestling table out to decide, here is the science of it. It depends..

If you like spinach on your pizza, fresh baby spinach is the best. Like mushrooms however, they need to be buried under the cheese. The other method for spinach is to chop it and mix it with the shredded cheese (no longer a quickie lunch).

With tomatoes, don’t put them on the crust (before the sauce). The high water content of tomatoes will make the crust soggy. Best thing for tomatoes is sprinkle some cheese on the sauce, place your tomatoes and then the rest of the cheese. The tomatoes will become visible as the cheese melts and it will enhance the appearance and the flavor.

Pepperoni, sausage hamburger or any meats can safely go on top. Be sure to use lean meats. Greasy pizza is no fun. I will address this quickly because this is a bigger controversy than Over or Under. Pineapple, like tomatoes, high water content, dry thoroughly before placing in between like tomatoes. There done. I don’t want to talk about it. ( I like pineapple on pizza. Don’t hate me. )

So you get the idea. It depends. Oh yea this was a quickie lunch. So, crust, sauce, toppings, cheese (or cheese, toppings), into the toaster oven at 450 degrees for 8 to 12 minutes depending on how crunchy you like your crust. So start to finish only takes about 10 minutes.

Enjoy, and save me a slice.